Turn The Amps Up To Nine: Beach Slang at Rock and Roll Hotel

Do you remember the first thing you encountered that seemed as if it had been made just for you? That singular thing that connected with you on a deeper level and just made things ‘click’?

For me that initial moment came when a friend passed me a copy of The Perks of Being a Wallflower. Reading it through once wasn’t enough and I had to repeatedly revisit the book to make sure that I wasn’t mistaken and that these were real words, set in ink, that seemed as if they could have flowed from my own mind onto the pages. It was the first time I realized that there was a whole world of people, kids especially, that felt as lost as me and were trying to navigate their way through this thing we call life.

This is all a long way of making the point that listening to Beach Slang fulfills this same purpose for me, simply at a later point in life. When I say that I fear I am already wearing out their two 2014 EPs–Cheap Thrills on a Dead End Street and Who Would Ever Want Anything so Broken?–I am not exaggerating. Not to mention that 2015’s full length The Things We Do To Find People Who Feel Like Us is the most likely to be left on the turntable album in my house. Why do these albums exist in a perpetual state of ‘repeat’ for me, you might ask?

Well, if you’d been at the Rock and Roll Hotel in Washington, DC last Friday, you’d understand. You would simply nod and say, “It was great, really great” when someone asked you how the show was. And you know what, you’d be right, but you would also know that without being there it’s simply impossible to bottle up the energy, emotion, friendship, camaraderie and ear-splitting noise that reverberated inside those four walls.

From the moment that James Alex took the stage and let us all know that, “We’re Beach Slang and we’re here to punch you right in the fucking heart” to the moment, over 2 hours later, when they left the stage in a haze of euphoria, there was nothing but magic happening. When I first saw Beach Slang in DC it was at DC9 on a rainy Monday night last August in front of 40 people who, if they felt like me, seemed to be luckiest people on U St that night. That night was a seminal moment for me. Not only was there the energy given off by James Alex, JP, Ruben and Ed totally infectious, it was clear that the band was as much there with us as the crowd may have felt they were there for us.

Fast forward to a freezing night 6 days before Christmas. I’m in the basement of the First Unitarian Church in Philadelphia. That night was to be the homecoming for what had been months on the road for Beach Slang. And, well, what a homecoming. The energy I’d seen in August had simply been ratcheted up tenfold, the band had tightened up, and seemed to thrive off the crowd and it’s adoration for their message that it’s fine to fuck up, to feel lost and to have doubts about any number of things. Also, I walked out of that show and couldn’t have summed it up better than when my friend Brett said, “Man, I think we saw something really special happen in there tonight.”

But, as James Alex is always quick to say, Beach Slang is a family, and an ever-growing one at that, and that foremost he’s there for us as much as we’re there for the band. I mean, when he stood on stage at the Rock and Roll Hotel and said, “If you know anyone homophobic, sexist, or racist, don’t let them come to our fucking shows,” it’s quite clear that he leaves it all out there every night.

And Friday night in DC? Well, I am still buzzing. It was that kind of night. Not only were Beach Slang off the charts, Potty Mouth unleashed a searing set of infectious punk. The four women from Northamption, MA were making one last jaunt around the East Coast before decamping for LA, and they didn’t disappoint. Further adding to the analogy of Beach Slang and it’s growing legion of fans as a family, once Potty Mouth nearly brought down the house, they remained side-stage for Beach Slang.

Taking the stage with a Smiths-inspired mic stand wrapped in yellow and white flowers, James Alex and crew hit right into a full-speed set of songs from their current Polyvinyl album. Pretty standard stuff, right? Well, for the first 45 minutes or so it was just the guys ripping through their catalog, encouraging the crowd to scream and sing along with them, and the standard banter about the potential health benefits of a switch to vodka from bourbon for this tour.

At the hour mark, there were hints that this was going to be a night to remember. Cover song number one was an amazing version of DC-native Tommy Keene’s power-pop masterpiece “Nothing Can Change You.” Not be outdone when the inevitable calls came for a Fugazi cover, James Alex assured us that they’d be back and on the next time through DC play Minor Threat’s Out of Step in its entirety.

Appropriately stoked on that, the set began to get looser, with the requisite Jawbreaker cover–a full blast iteration of “Boxcar”–followed quickly by a song that can only be said to inspire the entire Beach Slang ethos: “Bastards of Young” off The Replacements classic album Tim.

It was around this time that James Alex asked if someone could float him up another screwdriver because, “thing won’t really get good until the 17th one of these of the night.” Well then, time to get locked in for more awesomeness, right?

Indeed. As if a few amazing covers weren’t already enough, James Alex brought Potty Slang up on stage, giving JP, Ruebn and Ed a one song reprieve. The reason? Well, a most insanely racous rendition of Nirvana’s “Territorial Pissings.” To say that this nearly blew the roof off of the place is an understatement. I could go on and on, but needless to say, when James Alex took off his belt and decided to use it as a headband to keep the sweat from pouring into his eyes–after already removing his de rigeur corduroy jacket–the gloves had been dropped. He admitted as much saying that, ‘While Ed always takes the time to come up with a great setlist every night, I usually take it off the rails about halfway through the night.”

And when the off-the-rails part of the show includes a suggestion for the crowd to throw out suggestions for bad 70s and 80s guitar riffs for Ruben to entertain with, who could complain? I mean, who doesn’t love a little “Hot For Teacher” on a Friday night?

And if you thought these guys don’t take themselves seriously, I’d argue that they’re simply so in love with making music and having a blast with a crowd of likeminded folks. Oh, also, when they lit into The Cure’s “Just Like Heaven”, I was left thinking, “how can these guys make a great song that much better?!?”

I don’t mean for this to go into a full on song-by-song breakdown of the show, but to say that I was enraptured with every word coming from James Alex is clearly an understatement. In the words of Charlie from The Perks of Being a Wallflower, I walked out into the brisk DC night thinking

“And in that moment, I swear we were infinite.” 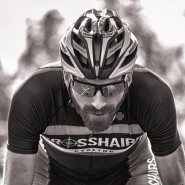